Showing posts from February, 2011
Show all

Things That Stick in my Craw - NEW!

A New York man whose wallet disappeared from his jacket pocket has gotten it back ­ 40 years later.

Rudolph Resta was working for The New York Times as an art director in 1970 when he left his jacket in a closet at the old Times building in Manhattan just off Times Square. When he went to fetch the jacket, the wallet was gone.

Fast-forward to last fall, when a security guard checking a gap by an unused window came across the wallet ­ apparently stashed there by a thief who'd pulled out the cash.

Resta was tracked down through pieces of ID linked to the Times.

Resta is now in his 70s. He's enjoying the memories the wallet contained ­ photos of his sons as children, his glamorous wife and his late father.

February 15, 2011
There is an ever decreasing gap between male and female harassers - 2010 saw them as being almost even, similar to 2009, when back in 2000, when we first started calculating stats, the majority of harassers were male 68%; we also saw a bit of an increase of gangs or husband/wife teams being the harassers 3%

Victim's ages have remained pretty much the same for the past few years, with 18-30 the primary targets, followed by those 31-40, then 41+

The same with marital status: Singles are the primary victims, followed by those married, divorced, life partner, widowed, separated

As expected, if they did know their harasser, it was primarily an ex or the wife/girlfriend of an ex (not boyfriend/husband, interestingly), followed by online acquaintance, work, friend/ex-friend, family, school (usually a fellow student) and saw a few cases involving landlord/tenant…
Post a Comment
Read more

February 14, 2011
I couldn't make this up if I tried...Why does this sound so wrong?
Crematorium to heat water for town's swimmers
http://news.yahoo.com/s/nm/20110208/od_nm/us_life_crematorium_odd

A local authority in England has given the go ahead for a swimming pool to use energy created by the next-door crematorium to heat its water.

The plan, the first of its kind in Britain, will see waste heat from the incinerator chimney used to warm up the neighboring leisure center and its new pool.

"The cremation process is a sensitive matter and we wanted to be sure our proposals had widespread support," said Councilor Carole Gandy, the leader of Redditch Borough Council in central England.

Eighty to 90 percent of people who contacted the council had backed the scheme, she said.

"Throughout we have been careful to explain how the technology would work, that it is tried and trusted, and that the practice is quite common in parts of Europe and especially in Sweden," she said.

I'm in the paper!

February 09, 2011
Phoebe and I drove two hours north to Kents Hill School. It was the third time going there for me and the second for Phoebe. It was actually Chris Gibson, who booked me, that inspired me to make Phoebe our mascot. When I got her two years ago, the vet suggested taking her everywhere I could to socialize her. Chris let her come with me to sit in the library after my talk and that's when I discovered students would come to pet her, then talk to me.

I did something different this time around. The last two times I'd gone to KHS, I'd used one of my alter egos to friend students. Since I knew they were wise to me and many of them would remember me from two years ago, I randomly selected 50 students just to see what I could view on their profiles. I was in for a shock. *Without* adding them as a friend I found that:

•Six listed their cell phone number in their profile

•Half listed their complete date of birth

•1 girl listed where she works

Authorities in Seattle say bovine met the shoreline when beachfront residents found the body of a 400-pound cow washed up by the surf.

The tide later moved it in front of a home.

A Seattle Police Department Harbor Patrol vessel towed the cow to a boat ramp Saturday, where it was loaded onto a rendering truck. Graves say it had no ear tag or other identification.

It's not clear how it got in the water. Graves say it could have been dumped by owners after it died naturally.

The beached bovine was first reported by West Seattle Blog. 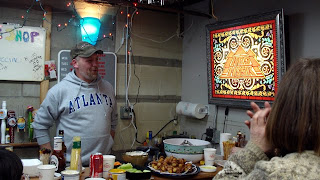 We were selected by Coffeemate to host a Free Flavor Friday Game Night at our house in our basement bar/game room. We got a box of goodies from Coffeemate that included the game Cranium, a very nice poker set in a little briefcase, samples of Coffeemate and Tasters Choice instant coffee, cups and napkins and coupons for free full sized Coffeemate for everyone who came to the party! We pulled out some of our own games, including Fact or Crap, Scrabble, Scene It and electronic darts. The friends who showed up brought appetizers and we had a blast! They were thrilled to get the free coupons. The bar was too small to take a photo of everyone at once, but you can see we had fun. The food went quickly and we laughed and talked and had so much fun we plan on doing a game night on our own some Saturday soon!
Post a Comment
Read more

February 04, 2011
Listen to me as I'm interviewed for the Internet Safety Podcast
Post a Comment
Read more
More posts